Nicky Romero and Avicii recently (well a little less recently now) released their music video for ‘I Could Be The One’. If you haven’t seen it yet, see below:

In the video a woman who has become fed up with her job is at a critical ‘come to jesus’ moment and feels trapped by the judgements of the society around her. After dreaming of a life free of the stigma, redundancy, and dullness of her current life, she sets out to live the life she has always wanted.

I love this woman’s fierce attitude, but I will agree that kicking sand castles and giving people the bird isn’t really what we should all be aiming for!

Now I won’t try to say this paints a fully accurate portrayal of how to solve work/life balance issues, but it does give a very compelling argument why that balance should be struck. I’m not saying we should all quit our jobs and move to Barbados…but here are a few less caustic things this video may suggest we do:

Also, sorry for the delay. Here is a quick and simple set of 3 things you shouldn’t do in New York at night. If you are stuck at Penn Station, I sincerely apologize and encourage you to skype/call/reach out to your loved ones in this turbulent time. I wish you the best. Here we go, things that will get you mugged…er…that you shouldn’t do at night:

I’ve wanted to address this issue for a long, long time. No doubt anyone who watches the ABC show ‘Shark Tank‘ has become familiar with the usual suspects: Barbara Corcoran, Daymond John of FUBU, ‘Mr. Wonderful’ Kevin O’Leary, Mark Cuban, Robert Herjavec, and Lori Greinier of QVC. However, having gone through that listing, something seems a bit off…doesn’t the ‘tank’ only house 5 chairs?

For some reason, there have always been the same four men sitting in each of the chairs season after season (with the exception of Kevin Harrington in season 1, and Jeff Foxworthy in season 2). Despite the fact that both women are featured as part of the current season’s cast, the two women are never seen together on a single episode. Is this perhaps meant to be a reflection of the disparity of women on corporate boards? Though I have been all-to-ready to hop onto the couch and tune in to watch hopeful Americans see their dreams fulfilled or squashed, the gender inequality represented by the ‘lone woman shark’ had never struck me so much as it has in the current season. In this season of Shark Tank, Lori and Barbara are swapped in and out like accessory handbags while the panel of men is left unaltered: Mark is always beside Daymond, who is always beside Mr. Wonderful, who is beside Barbara/Lori, leaving Robert off in the far corner. This lineup indicates that the only apparent spot for women on Shark Tank is between Robert and Mr. Wonderful, or nowhere at all.

END_OF_DOCUMENT_TOKEN_TO_BE_REPLACED

Apologies (again) for my lateness (again). As a llama in a silly hat once said: “I’m in the wrong here, I suck”

(in case you don’t get the reference, watch the video below)

Anyways moving on, this week I want to hand out a bit of advice on keeping the faith. And by ‘faith’ I don’t mean any religious sort of faith (unless that’s your thing). I mean faith in economy, the job market, and your life in general. Here are three things to tell yourself when life gets a little too real:

I promise the next two posts will go up in timely fashion this week!! I think 3 per week seems rather reasonable, no?

Hello again! So many readers may have noticed that I am a cheerleader for startup companies, and love the culture surrounding them. Why? Well unlike more traditional spaces, startups have a very different kind of vibe. So what are some reasons you should consider working for a startup? Here are 3:

Whether you decide to try out startup culture or not, I hope your job search is fruitful and fulfilling!

Hello again! Again, apologies for delayed postings (they will be back to normal soon I PROMISE!). So having spent most of my days analyzing my resume I’ve discovered three things that absolutely do NOT belong. As you may remember, I wrote previously about the necessary interview kit. A resume is a very crucial piece of this kit, and is often the only lasting impression a company will have. This is why your resume should be concise, clean, and expertly crafted…and shouldn’t have these three things:

You may have noticed ‘your picture’ was not listed as a thing that should not be on your resume. The reason for this is, certain countries do require pictures on resumes are standard practice. In incidences where you are applying to jobs overseas, research whether or not your picture is needed. However, on American job listings, leave your picture for your LinkedIn profile, and keep it professional.

As mentioned previously, you can expect a lot from companies at job fairs. But what about other job-seekers? Essentially job fairs draw in all kinds of people: some that you would expect and some that you wouldn’t. Here are five (albeit exaggerated) types you might see prowling a startup job fair: 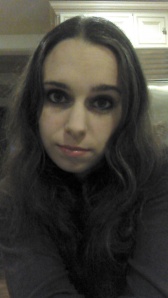 Did you miss my actually helpful posts? Well good, because I’ve done away with Viral Monday and the lot, and I’m just going to stick to NYC updates and social media helps and how-tos. ENJOY!

So as I’ve been navigating today’s job market, I’ve started to pick up on some valuable networking strategies that should absolutely be at your disposal as you navigate the tricky prospect of getting hired in 2012. Previously I’d mentioned specific job sites (or job boards), learning social media, etc; what I want to really hammer home today, is how to effectively utilize one major tool for employment, LinkedIn.

END_OF_DOCUMENT_TOKEN_TO_BE_REPLACED

SURPRISE! I didn’t feel like typing so you get this:

So I should have expected that at some point during my lovely stay in New York, that I would come face to face with a few ugly mugs. I’ve seen rats in the subways at night, I’ve sat next to smelly people on the subway, and I’ve even encountered a handful of unpleasant cat-calls…all with some respectable level of grace. However I do have one kryptonite: when I’m tired, I don’t really handle bugs well, much less cockroaches. 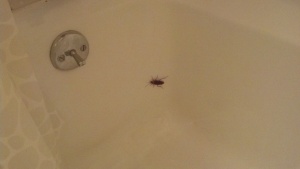 When I rolled in from Electric Zoo on Saturday at a staggering 3 AM, this hideous thing greeted me by jumping out from under the shower curtain, scurrying into the vanity mirror, and scuffling around the sink.

I should be noted that I was at Electric Zoo from 11 PM until close, had probably lost 10 pounds of water from dancing and screaming like a crazed fangirl, and had only had some meatballs and a hummus sandwich. My reaction to the hideous little nasty was probably more comical that effective: I sprayed at it with bathroom cleaner, yelped when it charged at me from the sink, and tried to swing at it with my face towel (not a brilliant idea in retrospect). Too exhausted to deal with it, I ended up chasing it with a plunger in the bathtub and hissing at it. I decided it would be smart to document its existence just in case, and snapped a picture of it before capturing it under the plunger. After I’d finally gotten something to eat, I managed to hit it with end of my loofah stick and promptly threw it in the garbage before taking a much-needed shower, hissing at it again, and going to sleep.

There’s An App For That!

Get The City Gopher App!